*Originally published on August 26, 2013 by ProEquest.

This unique challenge awards riders a $200,000 bonus should the same horse-and-rider combination win three of the country’s best grand prix events in the same year. 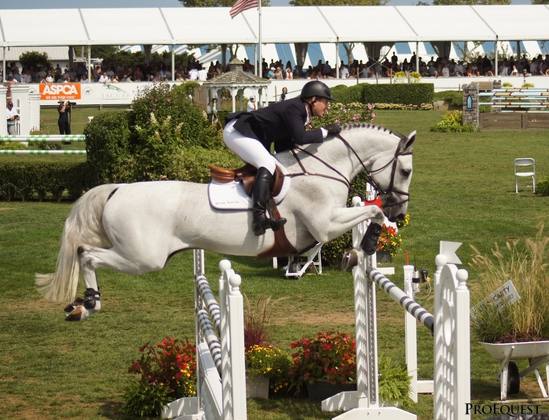 Ward and Antares F at The 2012 Hampton Classic; photo by ProEquest

If Ward can pull off a win and get another step closer to taking home the bonus, the final leg of the challenge will be the $250,000 Alltech Grand Prix, held on November 2nd at the Alltech National Horse Show in Lexington, KY.

“It’s exciting to watch someone like McLain Ward head into the second leg of the Challenge,” said Michael Taylor, the President of Taylor Harris Insurance Services. “Knowing he’s won the Hampton Classic Grand Prix six times in his career makes it all that much more possible to have him grab another leg of the Challenge. Taylor Harris Insurance is a proud supporter of equestrian sport and the excellence it requires to walk out with the blue ribbon. We are excited at the possibility of McLain emerging victorious in South Hampton and heading to the Alltech National Horse Show having won two legs of the Challenge.”

This year, show jumping fans can take part in the excitement of the THIS Triple Crown with the THIS Triple Crown Fan Challenge. Prior to the Grand Prix of Devon, fans were able to vote on who they predicted would win the first leg. When Ward clinched that victory, a fan who voted for Ward was randomly picked as that leg’s winner.

Now, with the second leg of the Challenge less than one week away, fans will be able to predict who will win at The Hamptons. Stay tuned to the Taylor Harris Facebook page for details on how to vote. The contest will open on Friday after the Grand Prix qualifier.

Winners will receive prizes from ProEquest and THIS, a Hampton Classic commemorative poster, as well as tickets to the Alltech National Horse Show this November!