*Originally published on August 27, 2013 at EquiSearch.com

After winning the $100,000 Wells Fargo Grand Prix of Devon in May, Ward and Rothchild find themselves with potential of achieving the Taylor Harris Triple Crown Challenge. 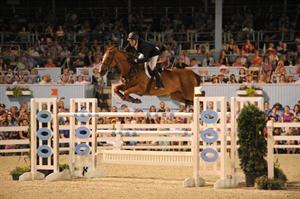 McLain Ward and Rothchild won the first leg of the THIS Triple Crown Challenge at the Devon Horse Show; photo by The Book LLC

If Ward can pull off a win and get another step closer to taking home the bonus, the final leg of the challenge will be the $250,000 Alltech Grand Prix, held on November 2nd at the Alltech National Horse Show in Lexington, KY.

“It’s exciting to watch someone like McLain Ward head into the second leg of the Challenge,” said Michael Taylor, the President of Taylor Harris Insurance Services. “Knowing he’s won the Hampton Classic Grand Prix six times in his career makes it all that much more possible to have him grab another leg of the Challenge. Taylor Harris Insurance is a proud supporter of equestrian sport and the excellence it requires to walk out with the blue ribbon. We are excited at the possibility of McLain emerging victorious in South Hampton and heading to the Alltech National Horse Show having won two legs of the Challenge.”